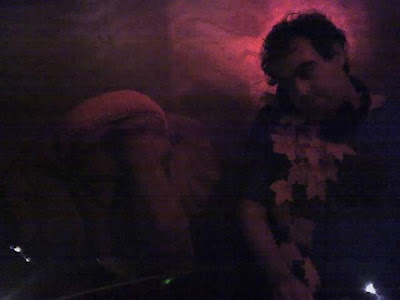 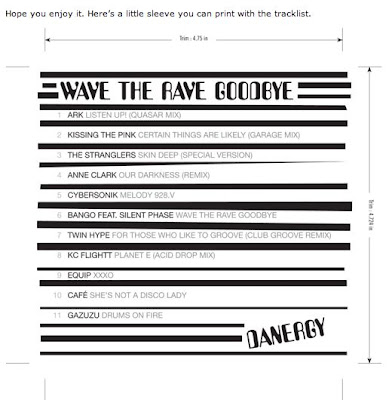 Dan Selzer is 1/2 of the amazing NYC DJ Duo Crazy Rhythms crew and owner/operator of Acute records. The other guy is Mike Simonetti, who you all might know from a little label called Troublemen Unlimited, which has been responsible for putting out some of the best records in the last few years. These two bring together quite a collection when they play, check out their mix @ igetrvng.com
This mix is a recent post to the Acute Records Blog
It's so good I need to repost it here so those of you who don't read Acute news won't miss out. Dan kills it again -His Words "

Quick notes about the selections…

1. ARK - Listen Up! (Quasar Mix)
First heard this on a mix tape from my friend Oliver, it’s an alias for A R Kane or a side project or something. I always assumed A R Kane was more responsible for the B-side to M.A.R.R.S’ Pump Up The Volume, their collaboration with Colourbox, since Colourbox was the band with the drum machines and samples while A R Kane were the shoegazers, but the more I listened to their records, especially their second LP with tracks like Crack Up and A Love From Outer Space, and finally this track, it makes me wonder what Colourbox contributed! It’d be easy to assume “the samples” but ARK were no slouches at that and I’ve always felt that this track loses it when it gets buried in an avalanche of dated 80s samples. Note to sell, always try to mix out before the scratched “Ronald Reagan…Ron Ron Ronald Reagan” bit comes in. Not that I’ve ever played this out. I love the sound of this but I’ve never felt like playing it out, despite hype to the contrary, I’m not sure if the world is ready for the late 80s revival they’ve been talking about for 5 years already.

2. Kissing the Pink - Certain Things are Likely (Garage Mix)
Kissing the Pink have some new wave gems from the early 80s that have been dug up by some of the cosmic crowd, but this is from later in the decade. I think it was actually released as KTP, a much more serious sounding bandname I guess. Actually who knows because my 12″ credits it to Level 42 on the spine, though I think that’s just a mistake.

3. The Stranglers - Skin Deep (Special Version)
I always liked Gary Gilmore’s Eyes since hearing it on Cherry Red’s Burning Ambitions comp as a teenager but never bothered with the rest. Only within the last few years did I bother checking out the first few Stranglers records. Smart, aggressive, dark, rock and roll with keyboards, I got pretty obsessed. But it took another couple of years before I got beyond the first 3 albums and realized how good the next 3 or so were. Probably another case of hearing the conventional wisdom “oh don’t listen to those they get all electronic and dancey and poppy” and thinking OK then remembering…I LIKE those things. The Gospel According to the Meninblack, La Folie and the Raven have some amazing stuff on them. Beyond that I start to lose track but from their next album Aural Sculpture there’s this beautiful song, their approximately 15th about Heroin, and for some reason it was released as an extended 12″.

4. Anne Clark - Our Darkness (Remix)
Anne Clark is a British poet type who’s released many albums of her vocals backed by a few different musicians including John Foxx, Patrick Fitzgerald and Virginia Astley. One LP was half composed by Vini Reilly, so Durrutti Column fans should check that out. The other half however is composed by her most frequent collaborator, David Harrow, who often worked in a classic mid 80s electro/new wave/industrial vein. In 1984 they released the 12″ Our Darkness. She was on Virgin records but this also came out on 12″ on Ten Records, which I think was maybe a dance/electronic imprint of Virgin? 4 years later Ten would release the compilation Techno! The New Dance Sound of Detroit, the release that would basically establish the term/title “techno” and introduce Detroit Techno to the UK, to devastating effects. This connection makes sense because the remix of Our Darkness is one of those British New Wave records that made it through to Chicago and Detroit and became DJ staples in the nascent House and Techno scenes. For many years, the easiest way to find Our Darkness was on a bootleg out of chicago that also included the acappella to Up Front’s Infatuation, Liquid Liquid’s Optimo and same acid trax type stuff. I heard Felix da Housecat play this to a packed Centro-Fly sometime during the glory days of electroclash, so it’s impact on the Chicago/Detroit sound hasn’t been forgotten. He also played Joe Jackson’s Stepping Out, so make of that what you will.

5. Cybersonik - Melody 928.V2
Our Darkness was a nice way to get from the eclectic 80s new wave of the beginning of the mix into a more techno/house thing. This song is one of the first few 12″s released on Plus 8 records, from 1990, and is a collaboration between Richie Hawtin, Dan Bell and John Acquaviva. It’s the 2nd song on the b-side to the better known Technarchy, one of the defining “hoover” songs of the techno era. This song however, like most of my favorite classic Detroit Techno, is just beautiful. I picked this up for 50 cents at the Tower Annex sometime in the mid 90s. They had about 30 copies of it and 30 copies of Speedy J’s Something For Your Mind. I should’ve bought them all.

6. Bango feat. Silent Phase - Wave the Rave Goodbye
This is a recent discovery. I can’t tell if Bango is one person and Silent Phase is another or if they’re both Stacey Pullen or what. This is from 92.

7. Twin Hype - For Those Who Like to Groove (Club Groove Remix)
And now some Hip-House! One of, if not the most, maligned genre of dance music, Hip House really doesn’t deserve the knocks it gets. OK maybe it does. On one hand you get a lot of ok to great golden era rappers trying to cash in on the beat with pretty wack tracks, and on the other hand you get great house producers, mostly in Chicago, with mostly questionable mic skills. Still, it’s a great deal of fun and when it works, it totally kills. I’m pretty into the production of this song, classic late 80s house stuff with the Yaz sample and everything. One of the mixes I hope to record soon is sort of a hip-house mix, loosely defined. This song and the following will probably appear.

8. KC Flightt - Planet E (Acid Drop Mix)
First time I heard KC Flightt was on Trevor Jackson’s Playgroup DJ Kicks Mix CD, which is one of my favorite mixes of all time, and definitely my favorite mix made in the last decade or so. I really relate to Jackson’s mix of post-punk/new wave sounds with classic house and techno and his use of vocals and actual songs. Anyway, that mix featured a de-hip-housed remix of Let’s Get Jazzy which I always liked. Recently I traded some music with my friend Aaron and came across this song and felt like I was struck by lightning. There’s no silly rapping here, just the strange spoken word performance about racial inequality, while the music is an utterly brilliant acid house track with an awesome Talking Heads sample. This is definitely my favorite song I’ve heard in the last few months.

9. Equip - XXXO
A few years ago, the seminal UK electro DJ Greg Wilson came out of semi-retirement with a series of mixes, articles on websites and finally a series of edits and new productions. On his first trip to the US, me and my then fellow Alldisco DJs (weekends at Capones, R.I.P.) had the chance to meet him at his hotel. He broke out his laptop and started to play us some tracks. We mostly expected to talk about electro-funk as that’s what his mixes seemed to focus on at the time, and we were excited to talk about his involvement in the Streetsounds Electro compilation. He told us a story about writing a song in 1983 that was rejected for not being electro-funk enough and for being too 4/4. He played it for us and our jaws dropped to the floor. Here it was, the closest approximation to straight up classic Chicago Acid House/Detroi Techno you’d ever find, but coming out of Manchester England in 1983. A few years later he put out a limited 12″ of this which I could never find untill I came accross it at the Amoeba in San Francisco. Killer.

10. Café - She’s Not a Disco Lady
At this point I figured how could I do a mix without some proper disco? This was a Mike Simonetti or Jeremy Campbell jam, one of them had it. Pretty goofy but utterly enjoyable disco with some serious vocoder action on the chorus.

11. Gazuzu - Drums on Fire
Some italo-disco, same people as or connections to the slightly more popular Digital Emotion and X-Ray Connection. They’re best known for the utterly silly Go Go Gorilla but this earlier track, while also utterly silly, is not quite as silly and has a certain celestial/tribal disco groove thing going on. Just one of those random 2 dollar 12″s bought on a chance that turns out to be the most amazing thing you’ll ever hear. And if you’re tolerance for euro-cheese is as as high as mine you may even make it to the very end, where the song goes completely off the tracks and pushes even my limits. A perfect way to end a mix."

Thanks dude. And nice blog, don't know how I slept on it!