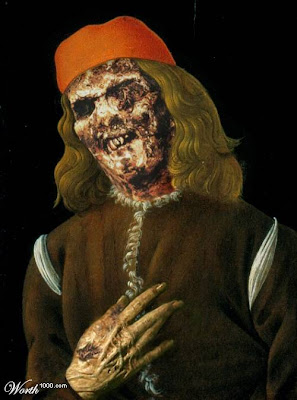 These two tracks are off of Disco Undead. Disco Undead brings together a cross-section of the world's finest, zombie-worshipping dirty-electro operatives in a collective bow down to deliver their own interpretations of soundtracks featured in their favourite 70's and 80's horror movies, all exclusively for the truly electrifried Device Electronic Entertainment label. Tracks come from Legowelt, Bangkok Impact, Gique (aka Datathief), Orgue Electronique, Solenoid, Fictional Character (aka Scarletron), Porn Darsteller, It & My Computer and many others. Some movies will be instantly recognizable; the debt of the electro nu-school to the works of John Carpenter is oft-cited and fully in evidence here, others less so - unless you collected all the banned 'video nasties' on the list, mid furore. Of course, these slightly more liberal times have seen most of these films passed uncut and in far wider circulation than their creators could ever have envisaged. Elements of this music have seeped into the mainstream, tainting flesh and consuming souls from within with its blank staring empty-eye sockets and decrepit imagery. From the true underground, directors such as Lucio Fulci, the most perverse purveyor of rotting flesh and popping eyeballs, and Dario Argento, laying on the stylish atmosphere and the frenzied stabbings, have inspired a creme de la creme of the current new wave of italo-disco protagonists to new heights of unease. Imagine your worst slasher nightmares transferred directly to the devil's disco dancefloor...and be very afraid! 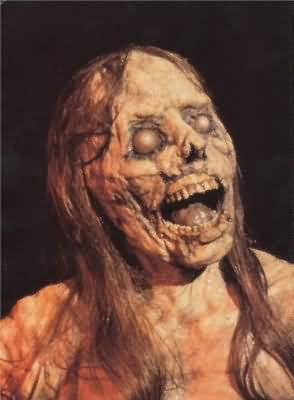 
A pretty lil' tribute video someone made on Youtube. I really appreciate the fact that they used music from the movie, as opposed to some god-awful heavy metal as so many gore fans tend to do. You don't have to be into heavy metal to enjoy some horror.
German Trailer for Zombi 2. Gotta love the brief nudity and the dark, ominous german voice over

and someone put together this nice music video with footage from Zombi 2, using the music from the soundtrack